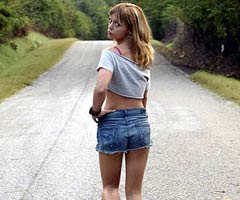 "Black Snake Moan"
Director: Craig Brewer
Fien Print Rating (Out of 100): 65
In a Nutshell: I actually saw this one back in early January before interviewing Craig Brewer for a Filter magazine feature and I held off on even a quickie review because I was underblogging at the time. Now? Blogging up a storm (ask me to sing a chorus of "Daniel Won't You Blog" to the tune of "Someone's In The Kitchen With Dinah" sometime).

It's interesting and probably a mistake that "Black Snake Moan" is being pushed out there as a wide release, though I hear it's tracking relatively well, largely on the strength of a fantastic ad campaign accentuating only images of Christina Ricci in her panties or Daisy Dukes. There's a problem: "Black Snake Moan" is two different movies -- The first half is a ballsy, exploitation movie straight out of the late-70s. It's gritty, sweaty and just plain nasty fun, with a killer soundtrack to match. That part of the movie requires at least some awareness of its down-and-dirty antecedents. If you don't know the game Brewer's playing, you'll probably think he's playing it wrong, but he's a smart enough guy that he knows every button he's pushing, every loaded image he's reproducing.

The second half of the movie, though, is an earnest, clear-eyed story of redemption and rebirth. It isn't nearly as effective, but I get the feeling that people who love the first half will hate the second and vice versa. The movie is sure to prompt debate, misinterpretation and too-quick condemnation from some circles. Like "Hustle & Flow," "Black Snake Moan" has aspects that ought to make it a mainstream crowdpleaser, but exactly the elements that make it good are the elements that will alienate multiplex viewers. I just don't know if people who go to drool over Christina Ricci are necessarily going to respond to the movie as a whole.

Ricci is amazing, incidentally. I've found her vaguely sexy at times in the past ("The Opposite of Sex," I guess), but she goes for broke here, both physically and emotionally. I suspect that "Black Snake Moan" will mostly be remembered as the movie that opened doors for her to get endlessly better roles. Samuel Jackson is good, but I never got past the fact that he was playing old and broken and a little overweight, but that he mostly carried himself like a man capable of ridding planes of snakes.
Expect some folks to adore that audacity of "Black Snake Moan" and others to try to tear it to shreds.
Tweet