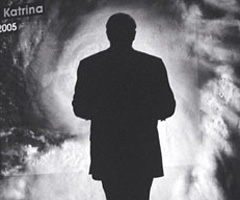 "An Inconvenient Truth"
Director: Davis Guggenheim
Fien Print Rating (Out of 100): 65
In a Nutshell: I'm a little bit late to the game on this one, but since I'm attempting to rush through the Oscar contenders I'd missed, I put in the necessary 90 minutes to enjoy Al Gore's impressively successful PowerPoint presentation. Here's a situation where we have to quickly distinguish between worthiness and quality. Maybe it's just that I'm in the process of plugging through Michael Apted's frequently brilliant "Up!" series via Netflix, but I'm currently inclined to require (request? desire?) more of a piece of documentary cinema than a clear-eyed slideshow mixed in with footage from the Al Gore 2008 presidential campaign mixed in with a commercial for the audio-visual capabilities of Apple computers. Despite Al Gore's reputation as vaguely robotic (a reputation that's never been deserved, despite it perpetuation by late night comics and Fox News pundits), "An Inconvenient Truth" is never boring and only occasionally less than persuasive. Gore manages to be both visionary and myopic -- he has his outline, corresponding to his slides and he never deviates, even to the exclusion of a complete telling of the story. Thus, Hurricane Katrina is presented as a tragedy caused by global climate change, despite the fact that the hurricane mostly *missed* New Orleans and the tragedy was really one of bureaucracy, faulty engineering and a particularly American head-in-the-sand approach to class and race, which you know Gore knows and just doesn't want to integrate into his presentation, as he were avoiding politicizing it, which is just silly. Really, I was constantly wanting to raise my hand to get clarifications or enhancements of certain things and the lack of that depth was a problem. I think Gore's attempt to universalize his message, to dumb it down, will play best to people who hadn't been concerned previously, but are inclined to agree.

Guggenheim's contributions in expanding the film from the stage are a problem as well. How many shows of Gore looking out care and plan windows in concern do we need? How many poorly integrated stories of tragedies or near-tragedies from his own life are necessary to make the point that he's learned to value our planet? Guggenheim should have noted what directors like Jonathan Demme and Steven Soderbergh did with the Spalding Grey monologues and treated Gore in the same manner. But yes, Global Warming deniers are pathetic morons. I get that. Accepting that fact, though, doesn't make "An Inconvenient Truth" a great documentary.
Tweet