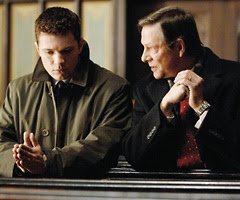 "Breach"
Director: Billy Ray
Fien Print Rating (Out of 100): 65
In a Nutshell: I was a big fan of Billy Ray's earlier directing effort "Broken Glass" and not just because I once had Stephen Glass lecture me on the importance of journalistic ethics. No, it was an intellectual thriller that knew its limitations and thrived within them. Ray's follow-up, the new drama "Breach," a very similar venture, a Washington-set thriller with no action scenes, few straight-up suspense set-pieces and nary a car chase or explosion. The similarities go so far as to "Breach" star Ryan Phillippe's strong resemblance to "Glass" star Hayden Christensen. Let's just say that Ray has a type of film he likes to make and that he has a type when it comes to leading men.

"Breach" isn't nearly as good a movie, I don't think, despite a story that has a good deal more at stake. Stephen Glass may have temporarily destroyed journalism as we know it, but he didn't actually get people killed. Robert Hanssen (Chris Cooper), the notorious FBI traitor, did. There was obviously a first script draft by Adam Mazer and William Rotko, after which Ray came in and did his thing, but even after his tinkering, "Breach" lacks the essential narrative economy of "Shattered Glass." Too many scenes are pulled from more generic TV-movie thrillers, many of which feature one of my favorite actresses, Caroline Dhavernas, sporting a German accent that gets less convincing the more she talks.

The movie mostly works when it concentrates on the game of cat-and-mouse between Hanssen and FBI newbie Eric O'Neill. An interesting thing about Phillippe: He's not a very good actor, but he's at his best when he players characters who have to bluff or play-act themselves. In those circumstances he feels realistic, because people who bluff in their regular lives are rarely as talented as Meryl Streep, but they might aspire to be as talented as Ryan Phillippe. Does that make sense. He doesn't embarrass himself opposite Cooper, who gives the latest in a career of expertly tightly wound portraits. The performance is all the more amazing when you consider that not only does "Breach" avoid explaining Hanssen's actions, but it makes repeated reference to the futility of understanding the man. With a different release time and different promotion, he could have been award-worthy. Laura Linney works hard to make her part slightly more than an afterthought.

"Breach" is a smart movies and a decent movie, certainly better than anything else in wide release now. I kind of view it as an appetizer while we wait for "Zodiac."