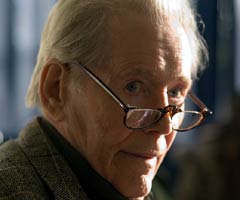 "Venus"
Director: Roger Michell
Fien Print Rating (Out of 100): 66
In a Nutshell: I'm prone to over-analysis ("Well duh," says the peanut gallery), but there are most certainly movies you're better off just taking for their surface pleasures and backing away slowly. I'll put Roger Michell's "Venus" in that category. You can enjoy Hanif Kureishi's breezy and biting script about aging and sexuality. You can take great pleasure in the supporting performances by Leslie Phillips and Vanessa Redgrave. You can get a sense of discovery from watching adorably accented newcomer Jodie Whitaker. But mostly you can revel in the fact that when he isn't looking like a cadaver, Peter O'Toole is as alive on the big screen as he's been since the '80s (watching his eyes light up from within his sadly sagging flesh is almost miraculous). If you do those thing and then turn off your mind, I suppose it's easy to avoid just how vaguely icky the movie is.

Perhaps the most striking thing about "Venus" is how the film itself avoids passing judgment on the plot, which involves an aging actor and former lothario leching after a young (her exact age is never mentioned) grand-niece of his best friend. Kureishi's script never exactly determines if the movie is about a crumbling Don Juan's love for women outliving his libido, or just about the way a master manipulator takes a wild child and gets her to cook fish and learn to love posing nude. It's not quite "Lolita" and not quite "Lost in Translation" and not quite "Taming of the Shrew," but it contains ample elements from all three. And if you stop to ponder the lessons learned by any of the characters, your brain may hurt.

Couple side notes: Is Roger Michell the most schizophrenic of contemporary British directors? Try figuring out a career trajectory that includes "Notting Hill," "Changing Lanes," "Enduring Love" and "Venus" in less than a decade. Maybe that's why the visual and editing style of "Venus" never exactly gels. And would it be fair to think of Corinne Bailey Rae (whose songs bog the movie down at regular intervals) as an even more somnambulistic Norah Jones? And did the world need such a thing?
Tweet