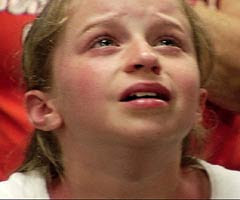 "Jesus Camp"
Directors: Heidi Ewing and Rachel Grady
Fien Print Rating (Out of 100): 59
In a Nutshell: Great moments with evangelicals No. 4520: Playing in the schoolyard at recess, back when I was growing up in Jackson, Mississippi, a more Jesus-friendly classmate and occasional friend came up to me and asked, without irony or judgment, "If you believe what you believe and I believe what I believe, why can't you believe what I believe?" It may have been one of the least persuasive spiritual pitches ever made, but it sticks with me for a simple reason: To the other kid, it made absolute and perfect sense.

My point, I think, is that if you've lived a life in which you've never had a third or fourth grader attempt to convert you, the things in Heidi Ewing and Rachel Grady's "Jesus Camp" are likely to seem shocking. I suspect there'll be a large number of viewers in the South or in the Midwest (where the movie was actually filmed), who will respond to the knowledge that one party of the evangelical movement is attempting to brainwash young children into becoming Warriors for Christ with, "Yeah that's sad, but duh."

Ewing and Grady aren't able to (or interested in?) progress very far beyond that surface level of shock. They show images of the same four or five kids -- Ramona Quimby Girl, Rat-tail Boy, Easy-to-Cry Moppet, etc. -- bawling, speaking in tongues or supporting Samuel Alito and think that's enough to create a developed portrait of what is obviously a cultural phenomenon. Me, I wanted more. There aren't nearly enough interviews with the kids or their parents. Certain kids and grown-ups appear in group scenes saying or doing things that almost demand qualification (I'm thinking of the one boy who gets looks of horror when he admits to watching Harry Potter movies at his father's house as one example), but I don't think the filmmakers had enough access. Despite the title, the actual Jesus Camp gets maybe 20 minutes of screentime, which leaves the movie feeling awfully diffuse, as if the main chunk of the movie wasn't enough for a feature and it was padded to get to a too-short 84 minutes. And what's up with radio talk jock Mike Papantonio? Why was he the lone vocal representative for the secular world? Why was a vocal representative of the secular world even required?

Being ever-handed isn't just avoiding a snarky voice-over and threatening lighting and camera angles. It's also letting the people speak for themselves, either to defend themselves or hang themselves, depending on the point of view of the observer. Becky Fischer, the shepherd to these impressionable sheep, comes the closest to getting a nuanced profile, managing to be alternatingly scary and reasonable. Given the material the filmmakers had, the movie probably should have been shaped around her, rather than shaped around the culty children, who are probably being exploited by Ewing and Grady, albeit on a different level.
Tweet