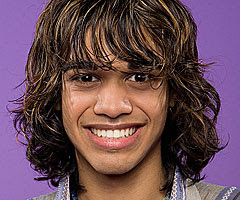 "The Guys are back," Ryan Seacrest warns, kicking off Tuesday (Feb. 27) night's American Idol performance episode. "And this time it's personal."

I believe he's referring to the fact that every judge, observer and armchair critic is pretty much ready to nuke the male side of the bracket entirely after last week. The dudes have something to prove.

After the episode begins with a classy and quick salute to Oscar winner Jennifer Hudson, the performances begin.

Singer: Phil Stacey
Song: "Missing You"
My Take: Last week it was notable how well Phil picked up once the song broke into its powerful chorus, so choosing a song with very little initial ebb or flow doesn't play to his strengths. The vocals are competent, though he doesn't get to the most passionate (and difficult) part of the track in his 90 allotted seconds. In the absence of any active performance, I find myself distracted by his shiny bald skull and his equally blinding white shirt.
Cerberus Says: Randy says "Yeah" several times and announces that Phil started the night off hot. Paula loves the tone to his voice, which she calls radio-ready. "I'm not jumping out of my chair," Simon says, calling Phil a good karaoke singer. We're only eight minutes in and we've already had three cuts to Jeff Foxworthy.

Singer: Jared Cotter
Song: "Let's Get It On"
My Take: Any time you can dedicate the performance of a Marvin Gaye song to your father, there's some unintentional irony at work. Jared starts off sharp on a song that isn't naturally compatible with his voice at all, forcing the arrangement to keep shifting octaves whenever it gets either too high (straight out of his nose) or too low (probably better for him). Jared murders the last note and pulls the mic away quickly, a gesture that stifles the mistake, rather than savoring it.
Cerberus Says: Randy thought it was pitchy in spots and started rough, but he liked the mannerisms. Paula has a hard time critiquing male singers under any circumstances, but amidst her giggles and double-entendres, she sounds ready to say he tried too hard. "It did remind me, though, of 'The Love Boat,'" Simon suggests, calling it corny in parts. "That would have been a great 'Love Boat,' man," Jared responds.

Singer: A.J. Tabaldo
Song:"Feelin' Good"
My Take: It turns out that when I look away from my monitor, I like A.J.'s voice a good amount. He tries things. He works with the words and the pacing of the song and actually delivers some real nuance. I was surprised by how much I didn't dislike him last week, and this week I was surprised by how much I liked the way he sang. In terms of performance, he tries much too hard. Everything from his attire to his smile to his mannerisms seems geared toward making young girls and middle-aged women squeal.
Cerberus Says: Randy says it was kind of nice. Paula gives props to the background singers. "I have to say that was actually nearly very good," Simon says with some hesitation.

Singer: Sanjaya Malakar
Song: "Steppin' Out"
My Take: Wait. When did Sanjaya become a Southeast Asian Corey Clark? And when did anybody request a Southeast Asian Corey Clark? Hair in a ponytail (a good idea), face engulfed by a hat (misidentified as a top-hat in the lyrics), he's unrecognizable. Where's Sanjaya? Not here. The song accentuates both his smooth, affectless tone and his woefully limited range. He gets lost in the rhythm of the song, falling into an embarrassed whisper at times. The last note is so slight the audience isn't sure if they're supposed to applaud, causing some awkward dead air.
Cerberus Says: Randy calls him a nice kid, but compares it to a bad high school talent show performance. Paula raves that she couldn't call him pitchy. That's all she's got. Simon goes back to the well of comparing it to a child performing at a family lunch.
Check out the rest of my recap, including the best and worst of the night, over at Zap2it.
Tweet