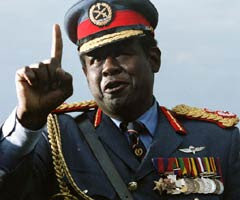 We're getting closer to the big ones now after Wednesday, Thursday and Friday's posts. Assuming that I decide who I think is going to win best picture tomorrow night, I think I'll unveil my guess.

Should Win: *This* is the category that Forest Whitaker should be winning in. Of the nominated performances, I'm split between Wahlberg -- who's barely in the movie but makes the most of every single second he's there giving a surprisingly smart and funny performance for an actor who isn't known as either smart or funny -- and Haley -- who challenges viewers to understand and sympathize with (but never forgive) a reprehensible character.
Will Win: This one has been a lock for Murphy for months and I thought he was pretty decent, really. There have been bloggers launching campaigns against him because he's a bit of an ass and he doesn't play the publicity game, plus he made "Norbit." The obvious dark-horse, upset pick is Arkin, who's almost in line for something of a career achievement award here, despite the fact that the character is a badly written mess. I'm intrigued, though, by Haley. The movie has a bit of Oscar support, obviously, what with its three nominations. It won't win for writing and it won't win for Winslet. Maybe voters choose to respect "Little Children" and to respect Haley's incredibly encouraging comeback. I'm picking Haley, because you don't impress anybody by guessing Murphy.

Should Win: Blanchett goes head-to-head with one of the best actresses on the planet and looks like she belongs. Hudson goes head-to-head with Beyonce and looks like she belongs. Do I need to explain to you which is a more impressive task?
Will Win: Blanchett winning an Oscar isn't a story. Hudson winning an Oscar is and the voters know it. Hudson does good work on "I Am Telling You," but the rest of her performance isn't on the same level as Blanchett's, or even Barraza's, really. That doesn't matter. Hudson will win because there's a tradition of using the supporting actress category as a platform for discovering new talent.

Should Win: For Peter O'Toole, it's autobiography. For Leonardo DiCaprio, it's a solid performance in a so-so-movie. For Forest Whitaker, it's a fantastic supporting performance in a so-so movie. The two actors in this category who carry their films completely are Gosling and Smith. Gosling's movie is better than Smith's and the performance is strong as well. He doesn't stand a chance.
Will Win: Whitaker is a pro's pro. He's been turning out worthy performances dating back to "Fast Times at Ridgemont High." If you look at things like "Bird" or "Ghost Dog," calling him an Oscar winner makes sense. But I'll keep saying this: "Last King of Scotland" is James McAvoy's movie, for better or for worse. Whitaker is in the wrong category and he's going to win it.

Should Win and Will Win: Great year for leading actresses. Historic, almost. Mirren can't lose, but each of the other actors against her would be deserving winners under other circumstances. The depth in this category is much deeper than the best actor race, something that may never have occurred before in Oscar history.

Should Win and Will Win: It's a great story: Martin Scorsese, long denied an Oscar, goes Oscar-bait-crazy and makes "Gangs of New York" and "The Aviator" seemingly just for the hardware. The Academy teases him, but gives the trophies to other people. Scorsese turns around and goes back to making crime movies, goes so far as to do a remake of a relatively recent Hong Kong thriller, abandons all pretensions and... Boom! In comes Oscar. Who says that playing hard-to-get doesn't pay off in life as well as love? I'm not in any way convinced that "The Departed" is a better directing achievement than either "Gangs" or "Aviator," but I guess Oscar voters had a point to make and it helped that 2006 was such a poor cinematic year. Of the nominated directors, Scorsese is the deserving winner here, but this is like Al Pacino finally getting his Oscar not for "Dog Day Afternoon" or "The Godfather 2" or "Serpico," but for "Scent of a Woman." On some level, I'm sure even Martin Scorsese finds this funny.
Tweet