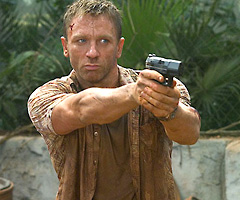 [It took a while, but I've finally reached the point at which I'm confident I've caught up on enough of the films I missed last year to throw a list together. I reserve the right to add or remove things at some point down the road, particularly since I'm really wobbly on several of these movies, especially the ones on this half of the list.]

10)"Casino Royale" (Martin Campbell)- Granted that I've erased long stretches of "Casino Royale" from my mind -- Adios to the Miami airport sequence and the stairway brawl in Montenegro -- but the latest James Bond entry was far and away the year's most successful action. Daniel Craig was every bit as good as I'd hoped he would be, beating those Pierce Brosnan lean years into a lamentable, disappointing pulp. Throw in Eva Green as the best Bond Girl since I can't remember when and the requisite stunts and exotic locations and you have a 007 film worthy of repeat viewings.

9)"The Descent" (Neil Marshall)- Before Zap2it decided that movies weren't worth covering, I was subjected to 2006 films like "The Hills Have Eyes" and "Silent Hill" and "When a Stranger Calls" and "An American Haunting." None of those movies provided me with a single jolt, with a single nightmare, with a single moment of primal terror. With "The Descent," Neil Marshall had me nibbling on my fingernails and experiencing something resembling genuine fear. Horror-done-right is something worth respect.

8)"Down in the Valley" (David Jacobson)- ThinkFilm never figured out how to market this off-putting revisionist Western, though it's not as if it were ever destined to find a big audience. The great performances by Edward Norton, Evan Rachel Wood, David Morse and Rory Culkin are undeniable, but so too is the off-putting tone, that has the film careening between mismatched romance, gritty Valley realism and a perfect portrait of psychological confusion. Jacobson doesn't exactly grasp the pacing himself and the movie has a whiff of post-production tampering about it, but it's still smart and genuinely challenging.

7)"Half Nelson" (Ryan Fleck)- Thanks to Ryan Gosling, "Half Nelson" is a mostly-unflinching character study of addiction. Like Maggie Gyllenhaal's similarly strong turn in "Sherrybaby," though, Gosling's performance is occasionally undone by a screenplay that on one hand is too conventional by a half and then has to work extra hard to cheat a few expectations. But I kept watching Gosling's eyes and his mannerisms and his interactions with the well-match Shareeka Epps. Gosling's performance -- the year's best by a leading actor, regardless of what Forest Whitaker's supporters would have you believe -- often seems more carefully considered than the movie around it and he pushed any hints of sentimentality far into the background.

6) "Inside Man" (Spike Lee)/"The Departed" (Martin Scorsese): I'm putting these two together for several reasons. The first is that I'm not sure I liked either enough after one viewing to put them in the Top 10 alone, but I get the feeling that once I watch them again, they may get better. The second is that I like that after years of attempting to make Important movies, both Lee and Scorsese had their biggest commercial and critical successes in years by just making good-old-fashioned genre pictures, proving that a well-made thriller is a well-made thriller and shouldn't be taken lightly. And finally, I like pairing these together because, for my money, both Lee and Scorsese made better movies this year, but they just happened to be documentaries for HBO and PBS. Thus, "Inside Man" and "The Departed" get bonus points from "When the Levees Broke" and "No Direction Home."

STAY TUNED FOR NO. 5-THROUGH-1, NOT THAT I'VE KEPT ANY OF MY FAVORITES SECRET.
Tweet