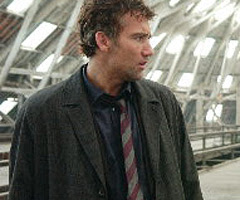 Yesterday I covered the first four categories on my ballot, the minor categories some might say. I wouldn't. Today I mostly cover the crafts categories, the behind-the-scenes stuff that most people in the flyover don't care much about.

Should win: Navarrete's theme is simple, but beautiful and works its way into every frame of Del Toro's film. Is it too simple and too humable? Perhaps, but this is my pick.
Will Win: Glass's "Notes on a Scandal" score is *awful*. It's like somebody said, "I'm going to write a loud parody of a Philip Glass score," but it got passed off as the original. Nobody (including me) saw "The Good German," but Newman's been ripping off his "American Beauty" score for nearly a decade now. I think Santaolalla would be a sure thing, but he won last year for the superior "Brokeback Mountain" score, but I still think he holds off Desplat, who confusingly won the Golden Globe for a different score ("The Painted Veil").

Should Win and Will Win: For my money, "Dreamgirls" is a one-song musical and that song, "I Am Telling You," wasn't eligible. The best thing I can say about the three new songs is that they don't seem out of place. "Listen" isn't a fantastic song -- it's no "Hard Out Here For a Pimp" -- but it's the best of the "Dreamgirls" lot and that certainly should be enough to beat generic Randy Newman (that "Cars" thing) and generic rocker chick (Melissa Etheridge's out-of-place "Inconvenient Truth" theme).

Should win: I wasn't a huge fan of "Dreamgirls" as an overall film, but the production design was top-notch on every level.
Will Win: This is a weird category, since "The Queen" and "Marie Antoinette" both feel like they ought to have been included, certainly over "Pirates." Adding to the oddities, the Art Directors Guild went with "Curse of the Golden Flower" (not nominated), "Casino Royale" (not nominated) and "Pan's Labyrinth" over the weekend. Since "Pan's Labyrinth" is the only guild winner in the race here, it's probably the only competition for "Dreamgirls." I still see "Dreamgirls" winning.

Should win: Without a doubt, "Marie Antoinette," though "Curse of the Golden Flower" sure looks pretty in still photos.
Will Win: This category is a problem: It's almost impossible for contemporary films to win, because they're just not showy enough, so however great Patricia Fields' "Prada" duds may have been, they can't compete. With only one nomination and minimal box office, "Marie Antoinette" isn't really in the race and "Golden Flower" probably hasn't been seen by enough people. That leaves "The Queen" and "Dreamgirls." The latter has more flash and pizzazz. I see "Dreamgirls" winning, well on the road to taking the year's most Oscars, best picture nomination be damned.

Should Win: I was so unmoved by "The Illusionist" that even the cinematography didn't attract my attention. Otherwise, I see the virtues of every film on this list, even the peculiar Vilmos Zsigmond nod for a movie I liked much more than anybody else. It comes down to Pfister and Lubezki for me. One is prettier. The other more challenging. After nominations for "The New World," "Sleepy Hollow" and "A Little Princess" (all proving he can do "pretty" as well as anybody), it's just time for Lubezki, perhaps the most respected cinematographic artist in the biz, to get his recognition. Pfister will have his time.
Will Win: "Children of Men" may have left some viewers cold, but nobody walked out unimpressed by those darned tracking shots. Alfonso Cuaron has gone out of his way to emphasize Lubezki's role in the collaborative process. Lubezki gets the win.

Should Win: "United 93." The film cuts between locations and characters and storylines masterfully. That's good. What's more impressive is how the editors keep a story where the end is well known in a constant state of tension. I also get the impression that piecing together a Paul Greengrass movie must be a real chore. All those hand-held shots must be hell on continuity.
Will Win: There's a school of thought that says that the reason "Little Miss Sunshine" can't win best picture is that it isn't nominated for best editing and that the editing winner between "Babel" and "The Departed" will take best picture. Well, the Editors Guild couldn't choose between them, delivering a tie. Schoonmaker is an industry icon, a legend, but will voters think that Scorese's inevitable win is honor enough for the both of them, particularly since Schoonmaker just won (her second) for "The Aviator"? Here's the problem: While badly edited movies are easy to recognize, well-edited movies are almost impossible to pick out, because nobody knows what the editor had to work with. Even editors themselves can't say for sure which cutters made a masterpiece from a pile of loose celluloid and which had the advantages of a precise and demanding director. As a result, the award usually goes to the film that looked most edited, be it the choppy war film or the film that balances the most storylines (even if that stuff was all in the script). Mirrione got one of those Oscars for "Traffic" and I'm picking him to get another here.