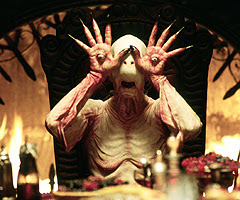 One of the problems with having opinions and stating them frequently is that year-end lists generally end up being forgone conclusions. I haven't missed a chance to plug for the films I most enjoyed this year, so most readers of this blog (or people I talk to in the real world) know what my five favorites were. There was a little bit of pseudo-suspense to the second-half of the Top 10, but the first half? Oh, just the usual suspects. It doesn't mean I like them any less, but I'll keep this short, since I've made my point before.

And now, my anti-climactic Top 5:

5)"Brick" (Rian Johnson)- The best narrative feature I saw in the first half of the year was a little genre film that Focus had been sitting on for over a year. It's a genre-bending hard-boiled treasure full of memorable dialogue, surprising performances (who knew that Joseph Gordon-Levitt had an inner Humphrey Bogart?) and the sense of near-limitless potential (can't wait for Johnson's "The Brothers Bloom"). The pacing isn't exactly what it should be. The over-looped dialogue is frequently sloppy. The visual style goes between indie-chic and sloppy. But talk about making the most of what's available.

4)"Dave Chappelle's Block Party" (Michel Gondry)- Focus Features had some great movies in the spring, but never exactly figured out what to do with them. While "Brick" was never going to be a smash, "Block Party" should have been. Then again, the Academy documentary branch didn't get it either, as "Block Party" wasn't even one of 15 finalists for an Oscar nomination. The movie isn't just Chappelle's comedy and the performances by folks like Mos Def, Common, the Fugees, Talib Kweli and Big Daddy Kane. It's a kickass party that also includes an examination of American urban life and contemporary race relations. But mostly, it's a "wave your hands in the air" good time.

3) "The Prestige" (Christopher Nolan)- I rewatched it again over the weekend and it held up so well that I contemplated moving it up to my second slot. I've read message board posts from people who are all "I saw the twist coming the whole time." Do those people go to magic shows and go, "Dude, I totally knew your assistant wasn't really sawed in half?" As Christian Bale's Alfred Borden observes, "The secret impresses no one. The trick you use it for is everything." In this case, the trick involves a career-best performance from Hugh Jackman, reliably excellent work from Christian Bale and suspenseful direction from Nolan that deserves the description "Hitchcockian." This is a movie that's only going to look better as time goes on. That being said, Nolan somehow blew that final shot. Weird.

2) "Children of Men" (Alfonso Cuaron)- If you had to chart out the perfect build to a movie, you could do worse than look at "Children of Men." The script is thin on characters and occasionally heavy-handed when it comes to dialogue (even by the standards of fable or allegory), but the journey taken by Clive Owen's character is fairy tale classic, from self-imposed slumber, through hell to rebirth. The Fugee Camp tracking shots will win Emmanuel Lubezki a well-deserved Oscar, but "Children of Men" warranted more Oscar attention (and box office) than it received.

1) "Pan's Labyrinth" (Guillermo Del Toro)- When I saw it at the end of September, I said "Pan's Labyrinth" would be the best movie of 2006 and I swear I wasn't just making a self-fulfilling prophesy for myself. There's a level of storytelling in this adult fairy tale that I haven't seen for any film in several years. It reaffirms all of the skill shown in Del Toro's "Devil's Backbone" and makes it a bit sad when such an obviously brilliant filmmaker feels content to only make masterpieces every few years will doing proficient, but unremarkable genre films ("Hellboy," "Blade 2") the rest of the time. What does it mean that both of my top two films are fairy tales from young Mexican directors? Hard to know.
Tweet