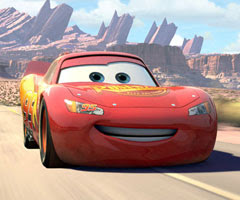 I'm slowly making my way through the nominees in the direction of the awards that people care about. I'm still on track to cover the four acting categories and best director tomorrow (I promise at least one surprise prediction!) followed by best picture on Sunday, I assuming I decide what film I reckon's gonna win.

What Should Win: I haven't seen "Happy Feet," so I'm already at a disadvantage in this category. I have, however, seen "Cars" and "Monster House." The former was hugely disappointing by Pixar standards, but still superior to the mostly plotless haunted house flick, which was released at the wrong time and probably should have only been seen in 3-D. So am I supposed to say that "Cars" should win? Screw that. Go Penguins!
What Will Win: Some people seem to like "Happy Feet" but Pixar's got all the power. "Cars" wins. I Yawn.

What Should Win: Well, you know that "Pan's Labyrinth" was my favorite film of the year in any language, so what do you think I'm going to pick?
What Will Win: "Pan's Labyrinth," with six nominations, has across-the-board Academy support, plus it's a great movie. The only way it could lose would be to a movie that the Academy thinks is "important," i.e. a Holocaust film or something like that. "The Lives Of Others" is the only other film with a shot, since there are people (not me, but "people") who think it's brilliant. It isn't, however, important. I look forward to hearing Guillermo Del Toro's acceptance speech.

Best documentary feature
“Deliver Us from Evil”
“An Inconvenient Truth”
“Iraq in Fragments”
“Jesus Camp”
“My Country, My Country”

Should Win: Yes, yes. "An Inconvenient Truth" is an important movie that everybody should see and I'm a moron for thinking that as a *movie* it's only so-so. "Deliver Us from Evil," while flawed, is still a shocking and powerful portrait of a pedophile priest and his victims. It's honest and fully realized, even if it over-reaches in its final act.
Will Win: "An Inconvenient Truth" could hardly lose. Then there will be confused people wondering why the director of "Gossip" (David Guggenheim) is picking up the trophy instead of Al Gore.

Should Win: Probably Monahan, though I'm not passionate about the choice. I think Christopher and Jonathan Nolan should have been nominated for "The Prestige," but they weren't.
Will Win: My favorite film in this pack is "Children of Men," but I know its script isn't its biggest strength. Field and Perrotta's adaptation is, honestly, a bit too literal at times. "Notes on a Scandal" is an effective camp-fest, but who gives Oscars to intentional camp? That leaves "Borat" and "The Departed." While you can imagine some younger Oscar voters thinking it'd be cool to see Sacha Baron Cohen et al win this prize (and save the evening with his speech), there's bound to be even more confusion about what the script was adapted from, etc. Monahan wins easily for "The Departed."

Should Win: Guillermo del Toro should win. He doesn't have a chance.
Will Win: This is a really interesting category, actually. Michael Arndt is my guess as the likely winner, despite the fact that his script for "Little Miss Sunshine" is a hideous amalgam of poorly rendered characters, contrived circumstances and indie sap. If the movie works at all, it's because of the actors and not the over-praised script. For shame. Peter Morgan is the most probable alternative for his intelligent, multi-layered "Queen" script, even if I found the movie a bit slight overall. Arriaga's "Babel" script is also dreck, which makes me sad since I thought he deserved a nomination last year for "Three Burials of Melquiades Estrada," a better film in every way.
Tweet