The Oscars Aftermath: I'm a Moron 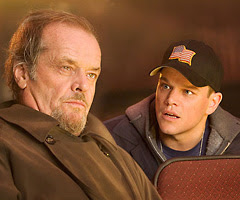 If you read through my Oscar predictions and analysis, one thing must swiftly be clear: I don't have a clue what I'm talking about.

At least in terms of predicting, I wreathed myself in no particular glory. Out of the 21 categories that I attempted to guess, I got exactly 11 right. That means I did better than an untrained chimp picking at random, but not quite as well as a trained chimp that watched nearly every nominated film beforehand.

I made mistakes that everybody made: Look, I can't feel bad about thinking "Children of Men" was going to win cinematography. It deserved to win. All signs pointed to it winning. But "Pan's Labyrinth" won and I'm OK about that. And with all those songs from "Dreamgirls" nominated, surely *one* of 'em had to win, right? Right?

I made mistakes that nobody made: Look, I knew Eddie Murphy wasn't going to win best supporting actor. But if I'd just guessed Alan Arkin, I'd have been like everybody else guessing Alan Arkin. Nobody picking Alan Arkin deserves to say they picked an upset today. But if Jackie Earle Haley had actually won? I'd have gone out on a limb. I stand by that.

I made mistakes and hoped I was wrong: Look, I suspected that the editing award and the best picture award were going to line up. I wanted "The Departed" to win. I guessed "Babel" was going to win, because the Academy hates me. It turns out that the Academy didn't hate me quite as much as I feared.

The choice that made me happiest? "The Departed" for best picture, to be sure. Mostly, I was just glad with the things that didn't win.

The choice[s] that annoyed me most? I've said my piece on "Little Miss Sunshine" and its script. That was still less silly than the Melissa Etheridge song from "An Inconvenient Truth" winning. We get it: If the Academy got to vote for president last night, Al Gore would have won.

Just to recap, here are my picks, with the actual winners. I put an asterix next to the ones I got wrong, just for easier mockability. I could run screaming from my shame or embrace my own mediocrity.