MovieWatch: "The Lives of Others" 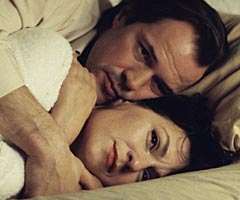 "The Lives of Others"
Director: Florian Henckel von Donnersmarck
Fien Print Rating (Out of 100): 71
In a Nutshell: Not quite as good as its supporters are declaring and if it beats "Pan's Labyrinth" for the foreign film Oscar, I may just shed a tear or two. It's a sturdier and more mature adult drama than anything made by an American filmmaker all year, with the possible exception of "Little Children." I would argue that it's mostly derived from a favorite genre of '70s filmmaking dealing with issues of paranoia, pervasive government control and the question of what it means to be a dissident and an individual and that if you compare it to something like "The Conformist" or "The Conversation," it comes up lacking in both craftsmanship and resonance.

Hmmm... That sounds too harsh, because "The Lives of Others" is far from an artistic disappoint. It's an amazingly evocative movie, capturing a chilly, atonal aesthetic best described as Iron Curtain Chic. Henckel von Donnersmarck (what a fantastic name!) and cinematographer Hagen Bogdanski create a GDR of grays and other muted tones, avoiding reds, yellows and oranges except in important symbolic contexts, with Ulrich Muhe's Stasi Agent Wiesler serving as the ideal representation of the ubiquitous, supposedly emotionless government. He looks like an outcropping of the cookie-cutter skyscrapers and generic tan or back automobiles. Of course, he finds his soul through his surveillance of non-subversive author and his actress girlfriend (Sebastian Koch and Martina Gedeck, matching Muhe).

Hmmm... That sounds too enthusiastic. How much of that evocation is based on a very conventional and predetermined idea of how to depict a certain kind of repressive regime? How much of Wiesler's character is based on a very archetypal sort of repressed foot soldier in his every action and character decision? And does the film's increasingly bittersweetly sentimental endings undermine some of what came before? And how much is the film's underlying misogyny an intellectual problem for me? The answer to each of those questions is "at least somewhat."
Tweet