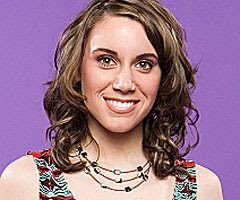 Of the four contestants who were sent home, only Rudy Cardenas' elimination seemed timely. Rudy stunk on Tuesday and he stunk without sufficient distinction to get the support of the Vote for the Worse folks.

No, I'd have had Amy Krebs -- extremely cute from certain angles, but vocally unremarkable -- going home next week and Nicole Tranquillo -- a bit less cute than Amy, but a bit better musically -- being eliminated the following week. Based on the popularity of "Antonella Barba nude photos" as a Google search phrase (just go here, you web-surfing pervs), it's no surprise that the talent-free New Jersey resident skated by for another week, though Alaina Alexander's survival is a bit of a quandary. But not a huge quandary. She's not making it to the Top 12.

Paul Kim was the only person whose eliminate bothered me a little. He has a better voice than four or five of the remaining males, but he over-sings and he over-relies on irksome affectations. I know why he didn't strike a chord with anybody after his Tuesday performance, but I feel like the guy had potential to make it at least to the Top 10 or Top 12.

For my discussion of the popular "Idol"-watch theory that "It's better to be memorably bad than not to be memorable at all" check out Zap2it.
Tweet