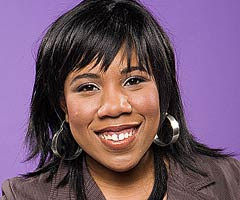 I've already written a general post on the "Idol" Top 24 over at the Zap2it blog, but the great thing about "Idol" is that I almost always have enough thoughts to go around without duplication. I'm sad like that.

For example, I didn't mention this at Zap2it, but what happened to all of the vocal diversity of past seasons? Last year we had a rocker and several country singers and it would have made sense to continue in that direction given that the two biggest stars from the past two seasons are Carrie Underwood and Chris Daughtry, who has somewhat surprisingly outsold everybody else from Season 5, thanks to an annoying catchy rock song that's constantly on the radio. But nobody this season rocks and nobody this season seems to be country-fied. With the vast majority of this year's Top 24, in fact, we don't have any real indication of what, exactly, their strengths might be.

Because we wasted so much time on awful singers and then so much time on contestants who got Golden Tickets, but then got eliminated either in Hollywood or beforehand, this "Idol" Top 24 has the look of utter anonymity. And even the people are immediately memorable -- Chris Sligh or Sundance Head or That Annoying Jersey Girl -- don't seem like plausible winners, at least not thus far.

Here are my instant reactions to each member of the Top 24 based on nothing more than the limited screentime they've received thus far and, in some cases, watching their FOX-provided interviews. I reserve the right to change my mind:

Alaina Alexander: She seemed hyper-emotional and needy when she auditioned in Hollywood and her snot bubbling gratitude last night didn't help. Her voice? Not memorable.

Amy Krebs: I don't think we saw her audition, but she comes across as very cute, but vocally generic.

Antonella "Jersey Girl" Barba: So clearly inferior to that Marissa chick she was paired with for the last Top 12 spot that putting her through was "Idol's" way of taunting viewers. Not voting for her would be viewers' way of taunting Idol.

Gina Glocksen: There's a tradition of gals with big voices and big personalities making it to the Top 12 and being instantly eliminated (think Vanessa Olivares or Amy Adams). Sounds right.

Haley Scarnato: Quite attractive in certain pictures, but the limited clip of her performing in Hollywood was AWFUL.

Jordin Sparks: She has a bigger voice than her age might indicate, but she comes across as dull and young in her FOX interview.

Lakisha Jones: There's no way to say this without sounding mean, but she's like a less attractive, less talented Frenchie or Mandisa. That still means she's talented, of course.

Melinda Doolittle: Girl can sang. If the competition is really about the voice, Melinda could be head-and-shoulders above the other women, if what we've heard to far is any indication. But what do you do with her if you're a record producer?

Nicole Tranquillo: One of several over-singers in the competition. I need an explanation for why she's here but Baylie Brown, Jory Steinberg, that Marissa girl and several others are gone.

Sabrina Sloan: Who? No. Really. Who?

Stephanie Edwards: She's got a good voice, but even after seeing her get in, the camera cut back to her several times and I didn't remember who she was at all.

STAY TUNED FOR MY QUICKIE THOUGHTS ON THE IDOL MEN.
Tweet