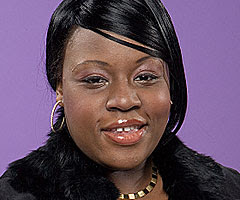 That was much more encouraging than last night, wasn't it? If you took Chris Richardson, Chris Sligh (for humor), Blake Lewis and Brandon Rogers from the male side, eliminated Antonella Barba, Alaina Alexander, Leslie Hunt and Amy Krebs from the female side, we could start the Top 12 tomorrow.

Singer: Stephanie Edwards
Song: "How Come You Don't Call Me?"
My Take: After the men last night, I'd forgotten what a really good singer sounds like. Stephanie has a torch singer's swagger -- she flirts and plays to both the crowd and camera -- and a voice to match. Is she flawless? No. She misses a couple notes on her first shot, but she's good at making adjustments in midstream. She's even checked her Idol playbook to see that the judges like singers who get down on their knees mid-performance. She's in another league from the stuff we saw last night.
Clarence Thomas, Ruth Bader Ginsburg and Simon say: Randy notes the difference from last night and says she set it off. Paula, in shock, calls her a star. I like the cuts to the men, who are already getting tired of hearing how much they stank, as well as one shot of Antonella Barba, who looks to be chewing gum. Simon calculates the improvement from last night at a million-times.


Singer: Amy Krebs
Song: "I Can't Make You Love Me"
My Take: Bonnie Raitt may be one of our most underappreciated vocalists. That's what I think every time I listen to an Idol contestant do a so-so cover, lacking the smoky character of Raitt's voice. Amy doesn't do anything wrong vocally, but she's nearly expressionless throughout. Granted that her expression is placid and beautiful, but she turns a song that ought to be a manifestation of true melancholy into an "Aw shucks, I can't make you love me so I just date somebody else" statement of meaninglessness.
Clarence Thomas, Ruth Bader Ginsburg and Simon say: Randy goes with "boring, middle-of-the-road," and he calls it safe (he doesn't appreciate Bonnie either). Paula agrees. Simon can't remember her already and says she has the personality of a candle.


Singer: Leslie Hunt
Song: "Natural Woman"
My Take: Simon has just coined my new favorite expression: "You're just this thing that sings." Leslie, like Amy, is just another thing that sings. Boots slowly making their way up to her neck, Leslie does the deodorant or female hygiene commercial version of "Natural Woman," all corny smiles and clumsy attempts to follow the camera, all sunshiny and bland. That make sense? It feels like a supporting or background performance. Clarence Thomas, Ruth Bader Ginsburg and Simon say: Randy was hoping for definite greatness and says the song was too big for her. Paula thinks she did a great job, but warns her on song selection. Simon implies that her comfort zone is walking dogs and she looks embarrassed and ungainly. Leslie's husband/boyfriend/father looks ready to hit him.


Singer: Sabrina Sloan
Song: "I Never Loved a Man the Way I Love You"
My Take: Oooh... Can I be the first person to say that there's something just a bit drag about Sabrina? Good. Her voice is going to be an acquired taste, because she can unquestionably blow, but it's going to be hard to distinguish between when she's singing and shouting. Every second we heard from the audition rounds, Sabrina was shouting, not singing. Tonight, she seems to be singing, right under the shout-threshold and she's powerful and commanding. It will be a tightrope.
Clarence Thomas, Ruth Bader Ginsburg and Simon say: Randy tells her that she properly put things down and that it was hot. Paula gives her a standing ovation. Simon praises Sabrina for her improvement since the audition, calling it the best so far.


Singer: Antonella Barba
Song: "I Don't Want To Miss a Thing"
My Take: Antonella's a pretty girl. In the words of the little-seen Canadian gem Fubar, however, she needs to turn up the good and turn down the suck. She oversings the song into mush. My feeling is that if you aren't getting the basic piece, trying to do advanced flourishes just makes everything worse, like putting rhinestone designs on parachute pants. She wasn't getting the basic song or the flourishes. Pretty girl, ugly karaoke.
Clarence Thomas, Ruth Bader Ginsburg and Simon say: Randy wrings his hands before keeping it real and calling it pitchy and bland. Paula says she's an amazingly beautiful girl and she wasn't bad. Yes. Yes she was. "Well, the good news is you're attractive, the bad news is it didn't work," is Simon's response and predicts she's damaged her chances of remaining another week. "Antonella, it would be like Ryan doing the news," is Simon's assessment of how over-her-head the song was.


The night's best performances were in the second half of the show and the rest of my reactions can already be found over at Zap2it.
Tweet