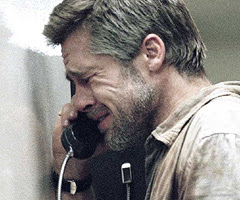 Mission accomplished. Between Wednesday, Thursday and Friday and Saturday's posts, I've covered all of the Oscar categories that I feel even vaguely qualified to speculate on. That leaves one lone category remaining.

In last week's issue of Entertainment Weekly, they anonymously polled a trio of Academy members and asked for their votes in several major categories. The screenwriter, allegedly a 25-year vet of the industry, said he voted for "Little Miss Sunshine" for best picture. His reasons? I quote, "It was amusing. You get a warm-fuzzy from it." EW owes it to the dignity of the Academy to out this fraud by name, lest anybody associated with the Oscars should want it thought that the industry's highest prize go to a film that was, at best, "amusing" and capable of generating a "warm-fuzzy."

If "Little Miss Sunshine" somehow wins the best picture Oscar on Sunday evening, it will become the slightest Best Picture winner in Oscar history, a film so insignificant that the jury at last January's Sundance Film Festival didn't give it a single prize. Despite its generally accepted status as a crowd-pleaser, it didn't even win the audience prize at Sundance [Editor's Note: Apparently "LMS" played out of the main competition at Sundance. That explains it not winning any competition awards, doncha think?]. "LMS" is a sloppy little feel-good indie, a poorly written, indifferently directed movie that's carried by a handful of genuinely fine performances. It's not an awful movie, or even a bad movie. It doesn't inspire that kind of passion in me. It was there. I chuckled a few times (and fewer times than I'd have liked) and then it ended. Why will it not be a surprise, then, if this little afterthought of a movie wins best picture? Guilds, baby. Guilds. After "LMS" lost to "Dreamgirls" in the musical/comedy category at the Golden Globes, it seemed like the darkest of dark horses to even early an Oscar nomination. Then it won the Producers Guild best picture and the Screen Actors Guild best ensemble and the Writers Guild best original screenplay (as original as a remake of "National Lampoon's Vacation" can possibly be). The only major guild prize it didn't get was the Directors Guild, but that's just because the groundswell of support for Martin Scorsese has made him unbeatable.

However, Scorsese's unbeatability is considered an isolated phenomenon, as is the likelihood of William Monahan taking adapted screenplay for "The Departed." Those presumptive wins, despite making "The Departed" the year's best written and directed films, are unlikely to make "The Departed" the year's best picture, at least in the eyes of the Academy. It's a straight-up genre movie, not usually the kind of thing that the Academy gives top prize to. On the other hand, it's the only best picture nominee to make $100-plus million, which means that even though "LMS" is seen as the crowd-pleaser, "The Departed" has pleased more crowds, cumulatively. It wasn't one of my five favorite films of the year, but it's the best nominated film, if you ask me.

The worst of the nominated films? "Babel." Forgive me, but I don't respond well to atonal filmmaking-as-dirge. "Babel" was every bit as contrived in its misery as "Little Miss Sunshine" was contrived in its comedy. Alejandro Gonzalaz Inarritu has directing talent, but he isn't a talented director. Two different things. "Babel" is a miserable mess of a movie. People have compared it to last year's undeserving best picture winner "Crash," but I'm not sure I agree. "Crash" was both a lesser film, but also a film with more clarity of purpose. Stupid people walked out of "Crash" nodding and saying, "My God. There's still racism and dischord in the world!" and they felt like they'd been cleansed. People are walking out of "Babel" going "Oh, I was so moved." "By what?" "Ummm... the difficulties of globalism?" If you're looking for award season precursors, "Babel" only has a couple. It won the Golden Globe for best drama, which only means that 30 or 35 members out of a buffet-loving 90-person voting board liked it. Big deal. It also split the Editors Guild prize with "The Departed," which is pretty inconclusive.

"The Queen" is a decent BBC or HBO movie with a heck of a leading performance. Helen Mirren will win. "The Queen" will be placated. It won't win best picture.

So what does that mean?

Should Win: If I have to make a choice, "The Departed."
Will Win: In a shocking and unprecedented move, the Academy decides not to give a best picture Oscar this year! My hunch: "Babel" wins, continuing the Academy's multi-year campaign to transition from barely relevant to entirely irrelevant.
Tweet