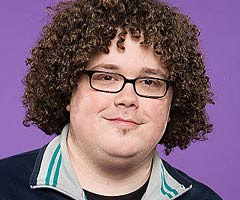 In the previous post, I gave the requisite time to the "Idol" women, but I have a suspicion that we may be looking at a second consecutive male "Idol" winner unless Melinda Doolittle is so vocally dominant that she can't be denied.

But if we're somehow going to get an male winner, it's gonna have to be one of these guys and I'm skeptical.

A.J. Tabaldo: Apparently this was his fifth time auditioning for "Idol" before making it. My advice to producers: If a guy wasn't good enough the first four times, the fifth time may not be the charm, at least not if the one nasal, whining, sharp clip they showed us was any indication.

Blake Lewis: After the beatboxing at his Seattle audition, I remember being impressed that his singing wasn't bad. But was it good? All they showed us from Hollywood was beatboxing. Can he sing?

Brandon Rogers: Brandon can sing. But what else does he have? He strikes me as likeable, but maybe not a forceful enough personality to actually win?

Chris Richardson: Given his amount of screentime so far, he may be a darkhorse, since the guy seems to have a good voice. Is he too raw?

Chris Sligh: Seemingly smarter and more appealing than past "Idol" crown princes like Jon Peter Lewis and Taylor Hicks, but we've only heard him sing in a half-octave range.

Jared Cotter: I think last night was the first time we saw this guy. He was doing "Cupid" and he botched half the notes. Not a good sign. I do, however, look forward to calling him Mr. Cotter.

Nicholas Pedro: I similarly look forward to making fun of Nicholas for quitting last season, though he'll be gone within two weeks.

Paul Kim: He's smart and funny and he has a good voice, but he's part of the over-singing posse and if somebody doesn't tell him to chill, he'll get tiring.

Sanjaya Malakar: Voice like Stevie Wonder, with the look of a Southeast Asian David Cassidy? Until his limitations become obvious, I'm hopping on the Sanjaya bandwagon.

On Zap2it, my guess for the Top Six men was: Brandon Rogers, Chris Richardson, Chris Sligh, Sundance Head, Sanjaya Malakar and Blake Lewis (Paul Kim will take Blake's space if the beat-boxer proves more of a performer than a singer).
Tweet