MovieWatch: "The Last King of Scotland" 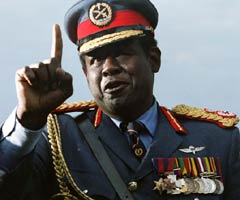 "The Last King of Scotland"
Director: Kevin Macdonald
Fien Print Rating: 61
In a Nutshell: In the past week, I've seen three films in theaters -- "Babel," "Blood Diamond" and "The Last King of Scotland" and I have to say... ALRIGHT ALREADY! I GET IT! WHITE FOLKS IN AFRICA? BAD IDEA. Check. T.I.A. This. Is. Africa. Check. I get that we (my apologies for lumping myself in with all white folks) just don't understand the African ways and that by spending time in Africa, we only make things worse for everybody. I, of course, remember just a couple years ago when films like "Hotel Rwanda" tried telling me that the reason why things were bad in that particular African nation was that Bill Clinton (embodying the white man of the time) *didn't* go into Africa. I'd feel a bit more confident about these "Stay out of Africa, Honky" films if they weren't made by an American man, a Mexican man and a Scottish man, but still...

It's actually distinctly possible that of the T.I.A. trilogy that's dominated my past week, "The Last King of Scotland" was the one I liked the most, if largely for the magnificent and propulsive performance by Forest Whitaker, who in *no* way deserves the best actor Oscar. Sorry. If you're so clearly the second leading man in your own film, you're a supporting actor, no matter how charismatic and fiercesome you are and no matter how boring and cliche-ridden the movie might have been in your absence. Just as Jennifer Hudson and Abigail Breslin are really the leads in their respective films, Whitaker is a supporting player here, even if his Idi Amin is so dominant that you'd almost forget that the faun from "The Lion, the Witch and the Wardrobe" was getting an important lesson about staying out of Africa.

From what I gather, James McAvoy is essentially Scotland's answer to Zach Braff. He's playing the same part here that he played in the Narnia movie, a fact that I haven't heard mentioned enough. Like Mr. Tumnus, McAvoy's Nicolas Garrigan is a relative innocent lured in by a powerful leader and forced to betray his friends before being tortured. Perhaps what "The Last King of Scotland" needed was the Jesus Lion to save the day.

Anywho... I liked some of what director Kevin Macdonald and particularly cinematographer Anthony Dod Mantle accomplished here, finding a visual style that's partly documentary and party DOGMA. It's an aesthetic that doesn't necessarily match with Peter Morgan and Jeremy Brock's script, which is smart, but follows the conventional genre playbook throughout, deviating only for moments of extreme violence toward the end. But over what period is the story taking place? It could be a week, a month or three or four years? Time is measured in plot events, not character evolution. I also fear that Uganda itself becomes a marginal character in the film's second half, much to the overall message's detriment. Hmmm... The more I'm thinking about it, the less I'm liking it.